Tea-mail! Send someone a custom greetings card with tea. You type the message - we'll deliver the card for you.

Our range of loose leaf tea is available in plastic free packaging including organic dragonwell.

Paper filter bags for making your own tea bags

Kinto Tumblers - perfect for keeping your tea hot at work or at home. Comes with your choice of FREE tea

The dry aroma is fruity, yet sharp, with a mingled whiff of aniseed. Once steeped, this aroma turns to sweet cinnamon notes. The ingredients crate an unusual deep yellow liquid, whilst the flavour is an elixir of prominent cinnamon and aniseed. There's also a subtle hay note! This isn’t the prettiest blend and the combination of ingredients is more than weird, but the notes are warming and tasty, capturing the essence of Christmas well enough. A bit of an oddball, nothing extravagant, but nothing to be overlooked either. 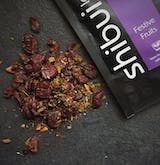 The table below shows the approximate brewing/infusing times for the different tea types.

It assumes around a 2.5 to 3g serving but it is not an exact science so experiment to find the perfect brew time to suit you.

It is best to use freshly boiled water - so if you've got some water left in your kettle from before - pour it out and start again!

If you don't have a fancy kettle which heats the water to different temperatures then a tip to for brewing green & white teas is to put the boiling water into the teapot or mug first and then add the tea. It will have cooled down a bit just by touching the cold teapot. That's what I do anyway... Save 10% on your first order

Great product really refreshing and needs nothing else added like sugar or honey.

Really great to find decent decaf with no plastic! Cause for a mini celebration! Great depth of flavour.

I've been searching for a decaf earl grey and I've finally found the one!

I am addicted to all things ginger and this hits the spot, it's delicious So happy its caffeine free too.

This is easily one of the best black teas I've had in a long time. Brews well at 3-5 mins for stronger taste and also excellent with a slice of lemon or lime, particularly when you want a refreshing kick.